"On the feast of Theophany the parish of SS Sergius & Herman of Valaam in Houghton, MI blessed Portage Lake. Assisting next to the choir and altar servers of the parish Subdeacon Benjamin Bryant was visiting from Holy Transfiguration Mission in Peroria, IL. It was somewhat of a historical event because to our knowledge this was the first blessing of open waters in this area that the parish celebrated at a feast of Theophany. It was gorgeous and blessed and a joyus. Some interested local visitors joined us too, and an article in a finnish newspaper is announced about this event." 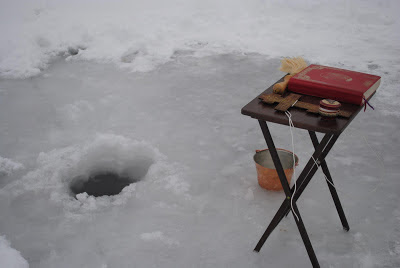 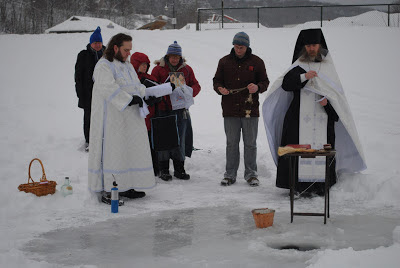 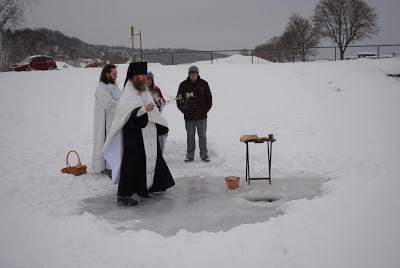 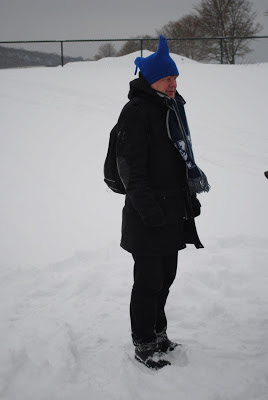 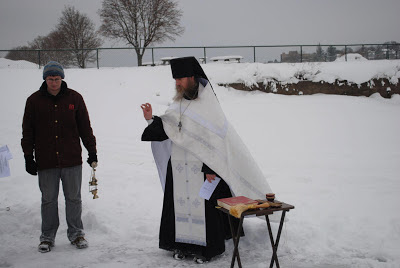 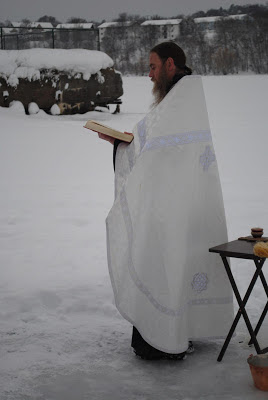 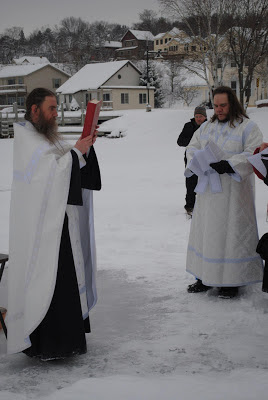 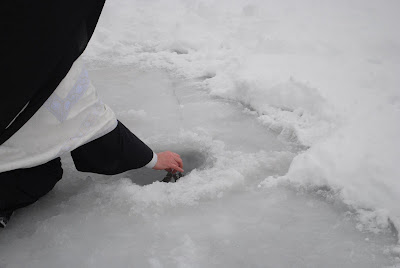 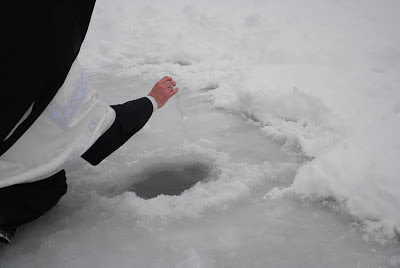 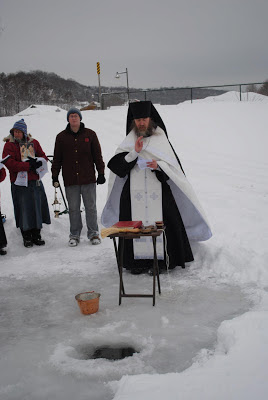 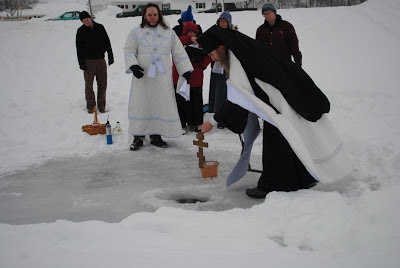 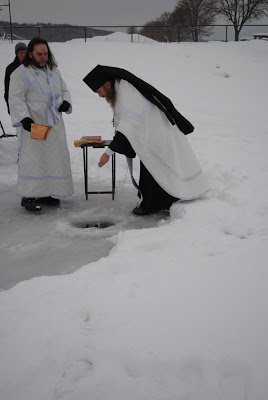 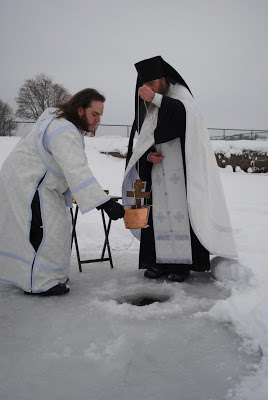 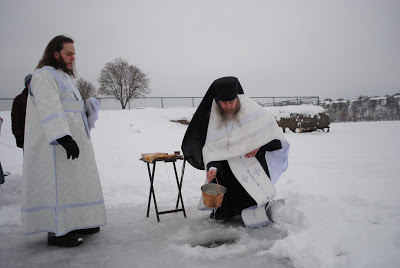 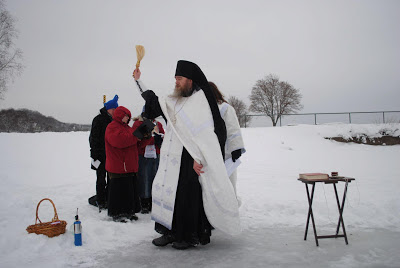 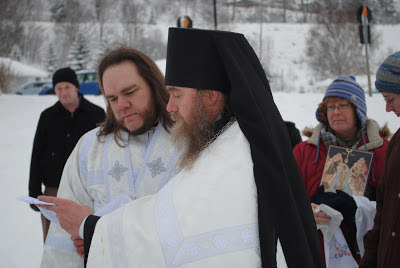 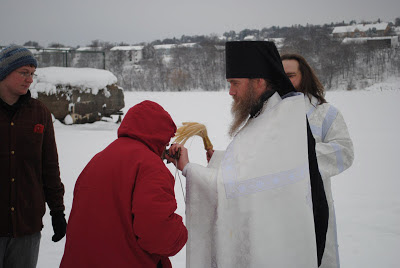 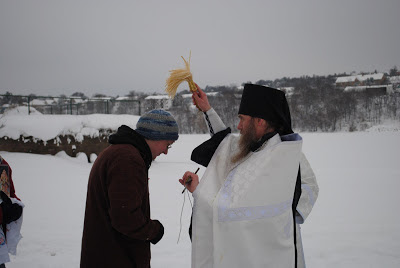 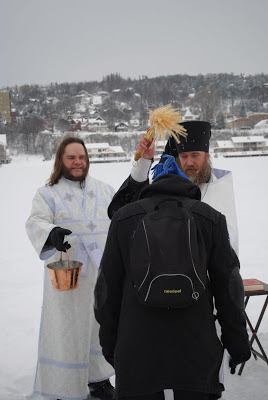 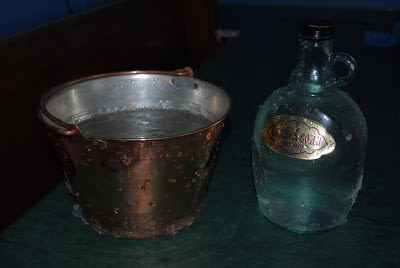 Posted by Subdeacon Benjamin at 2:32 PM No comments:

Nativity Epistle of His Eminence Metropolitan Hilarion of Eastern America and New York, First Hierarch of the Russian Church Abroad

With heartfelt love I greet all of you with the great, all-joyous Feast of the Nativity of Christ!

All that took place in the sacred cave of Bethlehem on that joyous night of the coming into this world of the Son of God bears a deep imprint of humility. The Omnipotent God Himself, the Creator of the world, the One who holds all in the palm of His hand, becomes a creature, one of us. He humbles himself even “unto death upon the cross,” all in order to save man. The most blessed Virgin, contemplating the mystery of our salvation, humbly accepts the prophecy of St. Simeon, who foretells the pain her motherly heart would endure, pierced by the double-edged sword.

Unknown by the world, the greatest blessing to mankind, the birth of Christ the Savior, was known by the angelic world and was glorified by them in their song: "Glory to God in the highest, and on earth peace, goodwill among men!" The dwellers of heaven were first to proclaim of the fulfillment of the promise given to our fallen fore-parents: “the seed of the woman shall crush the head of the serpent.” Hearing from the angel of the birth of the Savior of the world, the shepherds of Bethlehem traveled to the blessed cave — the cave that became highly venerated by all Christendom — in order to, like the Magi from the east, hasten to humbly pay homage to Him.

Contrary to a common understanding in the secular world, humility is not weakness of character. It is quite the opposite: only those who are unshakably convinced of higher truths can be truly humble in the Christian sense. Such were the Christian martyrs and venerable ones, who showed loving tolerance to those around them, but were immovable when it came to defending divine truths. Let us remember the great Elder Ambrose of Optina, who was born 200 years ago. For many years he endured severe illness. Yet through his spirit of humility, love and meekness, he healed the souls of all who came to him, ameliorating their sorrows. A feeble old man, he comforted the young and healthy, directing them to the blessed spring from which they could draw new strength.

As we venerate the manger of Bethlehem in spirit, let us entreat the Divine Child for spiritual peace, brotherly love and a genuine Christian existence, in order to become a source of comfort, support and joy for those who are close to us.

With love in Christ Who is born,

Nativity Epistle of Archbishop Mark of Berlin and Germany

The Nativity of Christ has been considered a family holiday since ancient days, serving as the familial ideal, the epitome of purity and chastity. Even in today’s Europe, which has forgotten God, family members gather at the table, try to bring cheer and gifts to one another, their hearts softening at the sight of the Child in the manger.

But can this earthly, external celebration of the Nativity fill our hearts with true joy and elation if the inner, divine meaning of the family, of fatherhood and motherhood is lost in today’s civil society?

It is only within the Church of Christ that the Most-High Himself gives us the example of the loftiest fatherhood and most elevated motherhood. The Son of God is born before eternity from the unoriginate Father. Within time, He is born by the Holy Spirit from the Virgin Mother. He is born in order to save mankind from sin and from its grotesque offspring, death. His birth is higher than the heavens and purer than the brightest stars. The Savior of the world arrives in this world through the Most-Holy and Most-Pure Virgin. That is how we Orthodox Christians receive and experience this greatest of events every year. The light of the Nativity has shone down upon us and illuminated the path to Christ and His salvation. God became Man by His limitless love towards His creation and opened for us the path to theosis!

How grateful should we be to Divine Providence that we now can celebrate the Nativity in accordance with the church calendar given to us by the Holy Fathers, when the noise of Western celebrations has died down, and the world around us has returned to its daily rhythms. As the weeks of consumerist bacchanalia end, we can calmly prepare ourselves in our Orthodox churches and families for the spiritual celebration of the Birth of Christ, the event that bound together heaven and earth.

The consumerist ideology has distorted the meaning of this greatest of Christian holidays, relegating it to various traditions and depriving the rituals of their original meaning. How can we celebrate motherhood, especially pure, virginal, chaste Motherhood, if in today’s society, childbearing has long ceased to be a desirable and natural thing? Children, even kindergarteners and schoolchildren, are already being taught a distorted view of sex and sexual life. Instead of love, animal attraction is exalted. The satisfaction of sexual instinct is deemed of value in and of itself even when it is separated from nature and the creation of family, with birth and the rearing of children. In many countries of the West they even ratify laws which equate same-sex “marriage” with the union between man and woman decreed by God. And this is taught to children in government schools! The state has become the enemy of millennial foundations of family life. Lawlessness becomes the law, sin is declared normal, falsity—truth.

Do we dare, dear brothers and sisters, allow such mockery over our children, who wish to preserve their virginity until marriage and chastity within it? Our children must not learn of lust of the flesh and lust of the eye (1 John 2:16), they must not be imprisoned by institutionalized perversion.

The Church has preserved and continues to preserve the teaching of the sanctity of the family sanctioned by God. The church bears witness to the purity of the order God has set forth in the family and in society. If marriage is as it was before considered a holy mystery, then child-bearing must be a natural part of human life. If respect for one’s neighbor as the image of God is taught, then society will be comprised of people who look upon each other not like animals do, with fury and lust, but like brother upon brother, with love and mercy. If chastity is placed at the foundation of human relations, and a chaste marriage is revered as a holy thing, then familial bonds would not fall apart in countless inhuman divorce proceedings. If a Christian attitude is once again restored to family values, Western society would cease to be a sick, withering tree, its boughs dying, more branches drying up than new ones sprouting.

We do not need internecine wars, we do not need diseases which are allowed by God to grip entire continents and kill many young people who are seduced by the preaching of sexual licentiousness and all sorts of perversions. What we do need is pure love for God and His creation. We need to hold tight to Divine laws in the forms that the Church from ancient times has heralded to believers. We are in need of the purity which the Most-Holy Mother of God so fully displays to us, having become for the sake of this purity the selected Vessel of the Incarnation of the Son of God on our earth.

And when we lay such a foundation for ourselves, in family and in society, then the fog and dusk will scatter, and we can lead the new generation into the light of Christ’s love for us. Then the Savior of the world can again and again become Incarnate in our loving hearts. He will lead us out of the darkness into His wondrous Light, and we will forever become participants of His eternal Divine love. It is only for this that we should live on this earth!

Christ is Born! Glorify Him!

Munich/Berlin, the Nativity of Christ 2012.
Archbishop Mark of Berlin and Germany
Posted by Subdeacon Benjamin at 11:56 AM No comments: