[Subdeacon Benjamin]: I was blessed to participate on Monday in the annual patronal celebration of the Synodal Cathedral of the Sign, the seat of the Synod of Bishops of the Russian Orthodox Church Outside of Russia.  Out of the 6-7 subdeacons serving I was asked to hold prayer book for the bishops during the antiphons and litanies, bear a fan for the small entrance, bear a fan for the great entrance (pictured above), and serve Archbishop Gabriel his zapivka (blessed bread and wine after Holy Communion).

During the communion of the faithful I was also able to have a short conversation with Metropolitan Hilarion.  I introduced myself and Holy Transfiguration Mission, which we discussed briefly, and asked his prayers for us.
Posted by Subdeacon Benjamin at 5:03 PM No comments:

Patronal Feast Day of the Synodal Cathedral of the Sign

On Monday, December 10, the patronal feast day of the Kursk Root Icon of the Mother of God of the Sign was celebrated in the Synodal Cathedral of the Sign in New York City. Divine services were led by the First Hierarch of the Russian Church Abroad, His Eminence Hilarion, Metropolitan of Eastern America and New York. The First Hierarch was co-served by Archbishop Mark of Berlin & Germany, Archbishop Kyrill of Western America & San Francisco, Archbishop Justinian of Naro-Fominsk, Administrator of the Patriarchal Parishes in the USA, Archbishop Gabriel of Montreal and Canada, Eastern American Diocesan vicar Bishop George of Mayfield, and a multitude of clergy from every corner of the Russian Diaspora. Eastern American Diocesan vicar Bishop Jerome of Manhattan was also present at the service.

The Liturgy was held in the presence of the wonder-working Kursk Root Icon of the Mother of God, the Protectress of the Russian Diaspora. The triumphal singing of the Synodal choir, under the direction of P.A. Fekula, facilitated the prayerful and festal mood of all of the clergy and worshipers present.

Upon completion of the Liturgy, the archpastors and clergy performed a short moleben before the wonder-working Icon of the Mother of God, after which the Primate of the Russian Church Abroad greeted concelebrating clergy and the faithful. For his dedicated labors on behalf of the Synodal Cathedral, warden Prince Vladimir K. Galitzine was awarded the Synodal Order of the Sign, 1st Class. The First Hierarch also awarded Synodal assistant Adam Krotov a Synodal gramota.
The sisterhood prepared a bountiful luncheon in the Synodal hall, during which festal speeches and congratulatory greetings were pronounced. During the luncheon, Metropolitan Hilarion was congratulated on the 28th anniversary of his hierarchal consecration. Below is a greeting to the Metropolitan from the vicar bishops and members of the Diocesan Council of the Eastern American Diocese:

Your Eminence,
Most Reverend Master, bless!

On behalf of the members of the Diocesan Council, and all of the clergy and faithful children of the Eastern American Diocese, accept our sincerest congratulations on the 28th anniversary of your elevttion to the episcopacy.


Over the past 28 years, you have labored tirelessly for the benefit of your flock, fervently praying for their salvation. First the faithful of the Eastern American Diocese, then of the Australian, and eventually of the entire Church Abroad have come to know you as a loving pastor and spiritual father. We are grateful to the Almighty for such a wise and humble Hierarch.

We wish, Your Eminence, that the Lord God fortify you spiritually and physically for your ongoing labor of service as First Hierarch in the vineyard of Christ.

Bishop Jerome was then greeted on the occasion of the fourth anniversary of his consecration to the episcopacy. Below is a greeting to His Grace from the First Hierarch:

Your Grace,
Dear Brother in the Lord,

On this joyous day for our Diocese, we send Your Grace our heartfelt congratulations on the fourth anniversary of your episcopal consecration. By the Mercy of God, you have faithfully carried out your archpastoral duties by selflessly giving yourself entirely over to the flock in service of Christ’s Holy Church. Your diligent service in the Synodal Cathedral of the Church Abroad and Archpastoral care of the many parishes you take the time and effort to visit have led the faithful to recognize you as a discerning and loving shepherd.

May the Lord grant you many years of health and renewed spiritual strength to continue carrying your weighty archpastoral cross.

Posted by Subdeacon Benjamin at 4:19 PM No comments:

Glory be to Jesus Christ!

On the blessed 25th Sunday after Pentecost, 2012, Holy Transfiguration Orthodox Mission served our first Divine Liturgy.  With the blessing of His Grace Bishop Peter, Peoria native Archpriest David Moser celebrated with us and along with his parents and some of his extended family who traveled from Kentucky to be with us as well.  Our service was graciously hosted at the historic Zion Church in Brimfield, also with some of their parishioners in attendance. 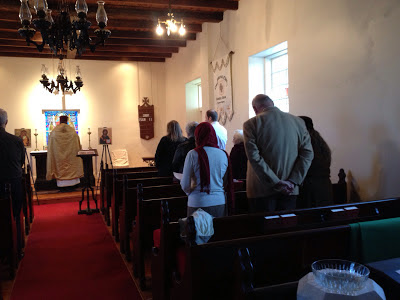 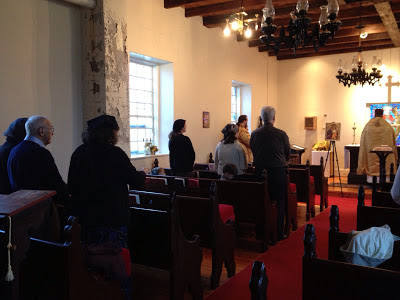 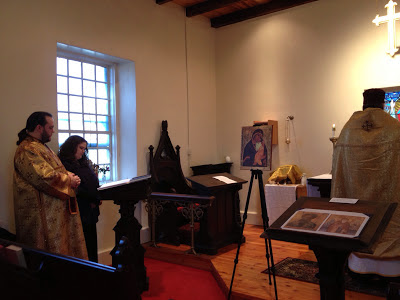 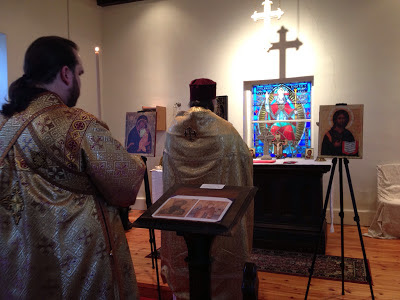 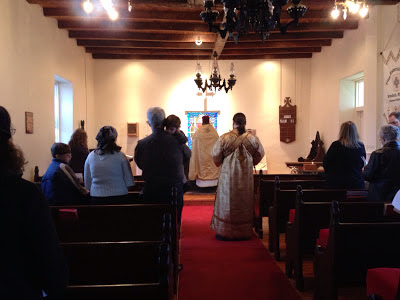 Fr. David's homily expressed the all-importance of forgiveness in order to attain the humility that leads to purity in Christ.  The Orthodox faithful partook of the Holy Mysteries.  All 21 in attendance stayed after the services for refreshments and conversation.

Many thanks to everyone who attended, to those who served, and to everyone who has prayed for us.  We are also thankful to our hosts, Zion Church of Brimfield and St. Andrews Church in Peoria.  God willing, this will have been the first of many liturgies to come in the Greater Peoria Area at Holy Transfiguration Orthodox Mission!


Posted by Subdeacon Benjamin at 7:49 PM No comments: